The cleavers, called CT-105+ (right) “feature a new clamping function which improves cleave angles by automatically detecting the optimal camping force. Alongside a 75% reduction in clamp force, there’s a 90% reduction in the consumption of fibre compared with the CT-105”, according to the company.

There is also improved blade material to extend blade lifespan, a micrometer backstop to improve cleave quality, and cleave angle can be varied across 0 – 15°.

An optional fibre holder adapter is available with which to transfer fibre from the cleaver to its fusion splicer smoothly. 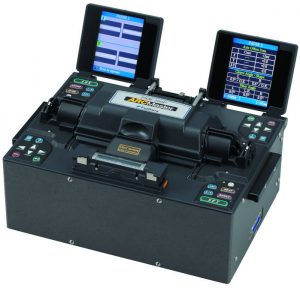 The update to the FSM-100P/P+ splicer series (left) is firmware which adds IPA2 interrelation profile alignment. “IPA2 provides noise reduced profile data which makes it possible to distinguish small differences in fibre structure”, said Fujikura, adding: “This is a new set of tools for operatives aligning fibres that are less common, or those which are more difficult to align with existing methods, including elliptical-core fibre, multicore fibre and octagonal fibre.”

Fujikura has been represented in Europe for over 30 years, and established Fujikura Europe in 1988 – whose sales administrative offices, technical support centre and service repair workshops now occupies a 14,000 ft2 site in Surrey. The technical centre includes custom services to optimise splicing, glass processing and fibre operation – including formulating splice recipes for novel situations.