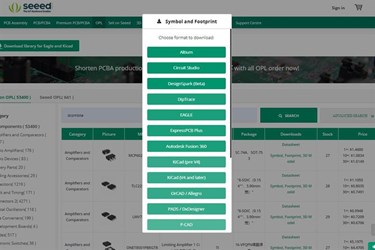 Seeed, a PCB manufacturer, has announced that it is adding SnapEDA computer-aided design (CAD) models to the Seeed and ShenZhen Open Parts Libraries (OPLs), making it easier for electronics designers to move from idea to fabrication.

The OPLs are a collection of commonly used components, designed to be used with the Seeed Fusion PCB Assembly (PCBA) service, that are widely available in the supply chain. It contains a wide selection of over 150,000 commonly used parts, from integrated circuits (ICs) to passives, to cut costs and reduce the turnaround times for turnkey PCB assembly.

During the parts selection stage, the OPLs save engineers time and reduce delays, since the parts are carefully selected to ensure they are widely available in the local supply chain, eliminating the need to import parts and undergo lengthy and costly customs clearance processes. This is especially helpful given the current global component shortage affecting the electronics industry. In addition to preventing delays, engineers can save money since the components in these libraries are sourced from Seeed’s affiliated partners network and/or are purchased in bulk.

During the design and manufacturing stage, the addition of the SnapEDA CAD models to the OPLs makes them more valuable. By downloading ready-to-use CAD models for the parts they select, engineers can save weeks of time, and reduce costly prototype iterations during the manufacturing process.

To get started with the new SnapEDA integration, engineers should visit the Downloads section on the Seeed’s OPLs. Once they click the Symbol, Footprint and 3D model link, a viewer will popup allowing engineers to preview the models, and download instantly.

“With the current constraints in the global electronic component supply chain, we’re pleased to be able to support the Seeed and ShenZhen open parts libraries, which are helping engineers streamline part selection and manufacturing. With the addition of SnapEDA models, engineers will now be able to design-in these parts in mere seconds,” said Natasha Baker, Founder and CEO of SnapEDA.

With the sheer number of components a project can have, the process of creating and verifying each component can be tedious and error ridden. To address this SnapEDA created the search engine focused on CAD models, as well as its own patented verification technology to optimise the quality of each model.

Over 15 PCB design formats are accessible with the new SnapEDA integration in the Seeed and ShenZhen OPLs, including Altium, KiCad, Fusion360, Cadence Allegro, OrCAD, EAGLE, DesignSpark PCB, DipTrace, and Proteus.

Engineers can also find SnapEDA’s symbols, footprints and 3D models on the main SnapEDA website, as well as on distributors’ websites including Digikey, Mouser, and RS Components’ DesignSpark. SnapEDA can also be found in software tools like Autodesk Fusion 360, Proteus and DipTrace.